Next Gen Chevy Models Could Have Airless Tires 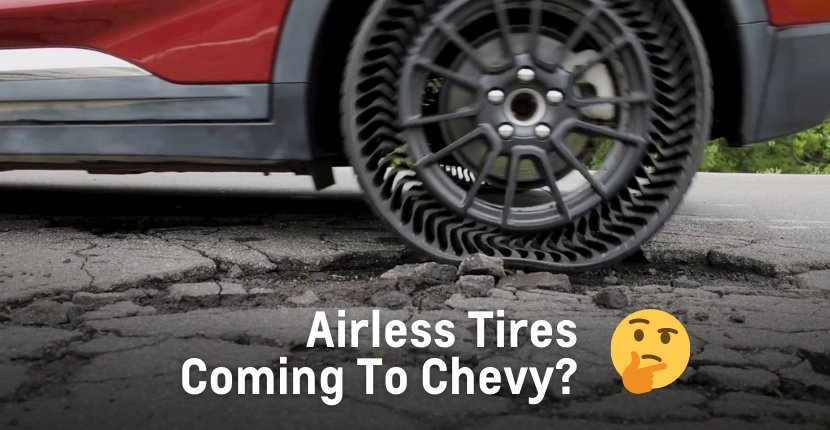 Next generation Chevrolet models could soon have airless tires. General Motors has introduced a lot of futuristic technology lately, like its all-electric future plan, and airless tires could be the next feature to come to Chevy vehicles. GM is partnering with Michelin, the tire manufacturer, in developing Michelin airless tires that will be sold on next-generation Chevrolet vehicles and electric cars. GM and Michelin’s partnership seeks to address the continuing problem of refilling tires with air. Check out all of the Chevrolet’s future-forward technology now at Mike Anderson’s Merrillville Chevy!

What We Know So Far About The Airless Tires

GM hasn’t officially announced its partnership with Michelin, so it’s been keeping the airless tire development very secret. One Michelin executive, however, said the Chevrolet Bolt tires are the first expected to include airless versions. The next-generation Chevrolet Bolt EV is expected to go on sale in the next few years. With GM’s transition to an all-electric future, the Bolt EV will headline the next generation of Chevrolet EVs.

Airless Tires Could Be The Future

There are many drawbacks to tires filled with pressurized air, particularly because air can easily leak out of tires. Tires are so vulnerable to punctures, so leaking air can spell disaster when this happens. While tires have become more reliable over time, losing air pressure in tires still happens frequently and the accompanying dangers are still just as bad.

On the other side, Michelin airless tires have flexible ribs to provide a sort of spring action, roughly the same way air does in a pneumatic tire. This means punctures to the tire tread won’t matter. The sides of airless tires are completely open, so you won’t have to worry about your tires causing mayhem out on the road.

Literally. Michelin and GM are developing a brand-new type of tire specially created to make driving safer and lower maintenance costs. The new design is called the Uptis. It combines the look of Michelin’s X Tweel with a different construction made specially for passenger vehicles. The Michelin X Tweel is used on lawnmowers and similar off-road equipment like ATVs. It features central ribs to hold up the exterior of the wheel, and they’re made of rubber reinforced with resin-injected fiberglass.

We want to bring the next generation of the Chevrolet Bolt with airless tires and it’s going to happen now in the next three to five years.

Garcin isn’t being shy about the possibility of airless tires! So keep an eye out for airless tires for cars to hit the market in the near future.

Looking for a Chevy service center near me? At Mike Anderson Chevy Merrillville, we’ve got you covered! Along with our expert maintenance department, we have an expansive inventory of the latest Chevrolet cars, trucks, and SUVs, as well as a great selection of used models. Most importantly, we have a staff of automotive experts and professionals to provide you with exceptional customer service no matter which department you need assistance from. Visit Mike Anderson Chevy to check out what’s in store for next-generation Chevy vehicles today!