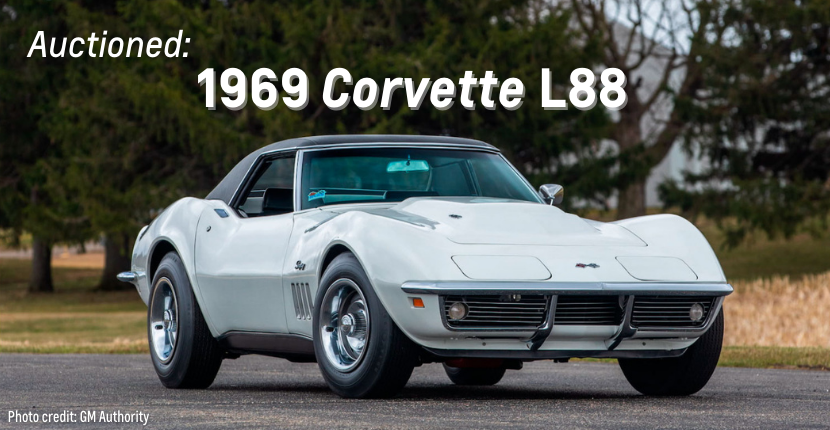 One of only 216 ever produced, an exceedingly rare Corvette L88 has found new owner, courtesy of the famous Mecum Auction House. With only 6500 miles, documented with the original order form, original keys, and a perfectly mint interior and exterior, this car could very easily have teleported straight from 1969. As a member of the Bloomington Gold Hall of Fame, a constant high-performer at Corvette car shows and competitions, and once a part of the renowned collector Chip Miller’s collection, this beautiful blast from the past netted a winning bid of $700,000.

Designed for competition, this stripped-down Corvette focused only on power, clocking in at over 550 horsepower with a little tuning. With Heavy-duty brakes and specially designed front and rear suspension, but without even air conditioning or radio, the L88 was never meant to be a daily-driver. Under the hood, it boasts the legendary L88 Corvette 427 engine.

The L88 that recently sold is as original as it gets. The paint still shines, the bumpers are free of rust, the black leather interior is nearly perfect—even the original window sticker is intact! Under the hood, the car is equally pristine. The engine bay is almost entirely original and the exhaust system has never been touched. It is no wonder why these L88 garnered so much attention, as one of the best Corvettes in the collector world.

Originally sold to a John Von Sprecken in Toledo, Ohio, this L88 racked up 6205 miles in its first year, before sitting in storage for a decade. In 1980, Mr. Von Sprecken sold the L88 to Chip Miller, one of the most esteemed Corvette collectors in the world before his passing in 2004. A member of Ed Foss’s collection for the next 11 years, this L88 fell into private ownership until it was auctioned last May. Highly original and with minimal damage, it is clear the love its owners have felt for this car.

Here at Mike Anderson Merrillville, we are proud to carry Chevy vehicles—one of the most historied and celebrated car manufacturers in the world—and we love a good bit of Chevy  trivia. At Mike Anderson Chevy, we may not have a 1969 Corvette L88, however, we do have used Corvettes for sale. Maybe you’ll stumble upon a future Corvette jewel! Finding us is easy, simply search for an Indiana Chevy Dealer or a Chevy dealer near me.