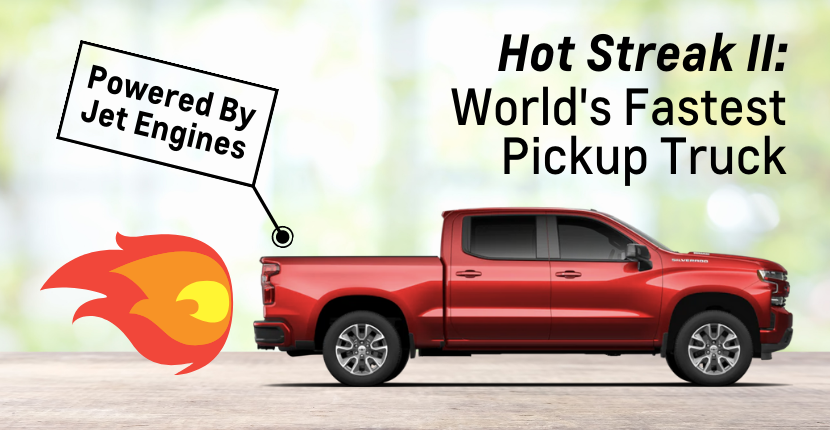 From Top Gun to Gone in 60 Seconds, Americans have long been obsessed with the “need for speed.” Luckily, the best car manufacturers in the world have taken notice, creating vehicles that blaze down the track at over 300 miles per hour. Today, a replica 1957 Chevy called Hot Streak II claims the title for world’s fastest pickup truck. It’s secret? Not one, but two jet engines bolted on the back. Taken straight from a Navy T-2 Buckeye, Hot Streak II flies down the runway at over 340 miles per hour.

In the early 1990s, the legendary Les Shockley had an idea. While car manufacturers were refining turbo engines and aerodynamics, Shockley took a different approach. After sourcing a pair of jet engines, his creation Super Shockwave destroyed the previous 0-60 record time of 4.5 seconds held by the GMC Syclone. But even that wasn’t enough for Les. After fitting the jet engines with afterburners, Shockwave boasts a whopping 25,000 horsepower, hitting negative 10Gs when its braking parachutres fire off.

Weighing in at only 4300 pounds, Super Shockwave is blazingly fast, clocking in at over 340 miles per hour. While not technically street-legal, Super Shockwave turned heads down the track as a racing-red replica of the 1957 Chevy pickup, harkening back to the original days of jet-powered aviation.

One enthusiast particularly fell in love with Les Shockley’s creation. Drag-racing lover Hayden Profitt II quickly bought Super Shockwave, renaming it Hot Streak II in homage to his grandfather’s drag-racing mobile Hot Streak. As an Air Force mechanic veteran, Profitt is well-equipped to maintain Hot Streak II’s jet engine design, all while reliving his days of working on fighters such as the F-15. Profitt continues to drive Hot Streak II today, leaving a trail of flames in his wake as he flies down the track.

At Merrillville Chevy, we are car enthusiasts at heart, and we remain in awe of Hot Streak II’s unbelievable power. To this day, Chevy has continued creating the most powerful pickup trucks on the planet—street-legal, of course. As such, we are proud to stock quality Chevy pickup trucks on our lot, and we constantly stay up to date on Chevy news, both for our own enjoyment and to provide even more value to our customers. Come see for yourself the latest innovations from Chevy. Finding us is easy—simply search for Chevy trucks for sale or your local Indiana Chevy dealer.